The magnificent Blue Ridge Parkway is considered to be the world’s first recreational highway as well as an official National Park within itself.  Located in the mountainous regions of North Carolina and Virginia, this renowned scenic byway celebrated its 75th anniversary on September 11, 2010. The event took place commemorating its first 12-miles of construction at Cumberland Knob Recreation Area in North Carolina just south of the Virginia state line.

The project began in 1935, when fully completed this scenic byway stretched 469-miles from Virginia’s Shenandoah National Park to the Great Smoky Mountain National Park in the high mountain country of Western North Carolina. The creation of a National Park stretching along a roadway for nearly 500-miles would be inconceivable in these present times, yet the engineering marvels that lie along this scenic byway rival the highway constructions of our modern day.

The Blue Ridge Parkway was designed to traverse along the ridge crest of the mountainous wilderness of two states, 181-miles of that being National Forest within 29 counties plus 11 steep miles of the Qualla Boundary Cherokee Reservation.

Roughly 277-miles of the Parkway’s 469-miles travel through lands which are bordered by private properties. This continuous unbroken stretch of highway connects the Skyline Drive in Virginia’s Shenandoah National Park to the scenic Newfound Gap Road in North Carolina and Tennessee’s Great Smoky Mountain National Park.

While many local mountain folks still refer to the Parkway as “the Scenic,” the Blue Ridge Parkway is also known as “America’s Favorite Drive,” and was originally considering the name “Appalachian Scenic Highway.”

Though the construction project began on September 11, 1935, it would take 52 years to complete due to unforeseen circumstances such as construction challenges, a major World War, and a 20-year legal battle between a determined landowner and the federal government over access rights. This battle resulted in an amazing engineering feat and the construction of the Linn Cove Viaduct.  This viaduct was completed in 1983, the final remaining 7.5 miles of the Blue Ridge Parkway was completed in 1987. This extraordinary scenic byway created a “National Park to National Park” experience unlike any other.

By an act of Congress on June 30, 1936 the Blue Ridge Parkway was place under the jurisdiction of the National Park Service of the U.S. Department of the Interior.  This ensured its status as a resource of national merit under the National Park Service’s mandate “to conserve the scenery, the natural and historic objects and the wildlife…and to provide for the enjoyment of the same in such manner and by such means as will leave them unimpaired for the enjoyment of future generations.”

The Blue Ridge Mountains from which the Parkway takes its name, are a large independent southeastern section of the Appalachian Mountain chain running from a narrow northern point in the mountains of Virginia’s Shenandoah National Park to its broad high southern mountains ranges of Western North Carolina, Eastern Tennessee and North Georgia.

The Blue Ridge Parkway began its origins during Franklin D. Roosevelt’s administration under his New Deal Plan. The vision for such a scenic parkway was perfect for the time, creating not only a recreational wonder for the American people to enjoy, it also created needful jobs and construction opportunities during the Great Depression. 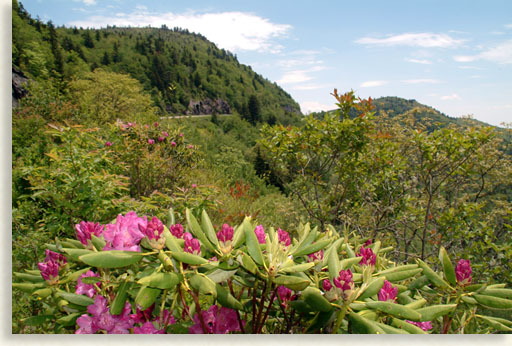 The idea of traversing along the ridge tops of the great mountains of the southeast is notable not only for its beauty and conservation, the project was also designed for long term economic benefits by bringing commerce to these rural mountainous regions through tourism.  Most people highly approved of the new scenic byway. In many cases the Blue Ridge Parkway was vital in providing or improving roadways leading down from the Parkway to local towns.

Unlike National Parks in the western United States where the land was mainly owned by the government and could more easily be set aside for such purposes. The majority of land in the eastern United States were owned by individuals and private corporations such as timber companies, these lands would have to be purchased by the federal government for the National Park’s scenic byway.

Some of the Blue Ridge Parkway’s land holdings came by means of land transfers from three large donations of private properties and the U.S. Forest Service.  Many welcomed the idea of selling their land in trade for a new start while many others objected to leaving their homelands. Timber barons preferred timber profits first then sell the ravaged lands to the government later, preserving the natural beauty and ecology was of no interest to them.

In order to fulfill the scenic byway’s plan for a recreational highway it became necessary for the federal government to secure these land in order to preserve and protect the forest that were left standing which in turn protected the mountainous landscape’s delicate water sheds from being further destroyed.

Not only is the beauty of the Blue Ridge Parkway necessary to conserve, one must take into consideration the biological diversity that lies along its upper slopes and ridge tops such as its 1,614 varieties of vascular plants, 43 amphibious species, and 75 distinct plant communities with 24 that are considered globally rare and 7 of which are considered globally imperiled.

Within the Park’s 82,000-acres along its 469-mile stretch, there are 15 watersheds along its high mountain and continental divide that are essential to the southeastern United States’ need for water, including 600-miles of streams inside the parklands with 115 of those waterways being headwaters.

The diversity of the Blue Ridge Parkway not only lies in its flora, fauna and waterways, you can also see within its multitude of mountain tops numerous exposed rock formations displayed within some of the oldest mountains in the world such as Grandfather Mountain and Looking Glass Rock.

Along the Parkway’s winding stretches of roadway are mile-post-markers providing access to points of interest. Brochures and other information about the Blue Ridge Parkway can be found at any of the Welcome Centers along the Parkway as well as information centers in towns that connect to the Parkway.

A drive along the Parkway offers many natural and geological wonders, such as waterfalls, 72 hiking trails, 5 campgrounds, modest mountain top lakes, mysterious mountain balds, and a large cavern at Linville Gorge where guided tours are available.

Throughout the Parkway you’ll find a wealth of history and historic structures including the 20-room Victorian, neo-Colonial manor house atop Flat Top Mountain constructed in the latter part of the 19th century between mileposts 292 and 295.

The Cone family donated this 3,517-acre estate honoring their namesake as the Moses H. Cone Memorial Park, to the Parkway in 1950. The Manor is now the home of the Parkway Craft Center, one of five shops of the Southern Highland Craft Guild, which features handmade crafts by hundreds of regional artists.

The official highest point on the Parkway is at milepost 431, the overlook at Richland Balsam Mountain reaches 6,053 feet above sea level, here visitors will find an exceptional view of the vast Blue Ridge Mountains. If that’s not high enough for you, there is an access road off from the Blue Ridge Parkway that leads up to the summit of Mount Mitchell State Park located between milepost 350 and 360 in North Carolina. Mount Mitchell is the highest mountain in the eastern United States standing 6,684-feet tall compared to the Great Smoky Mountains National Park’s Clingmans Dome which stands at 6,643-feet above sea level. 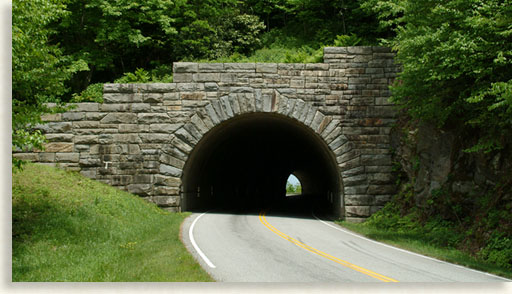 There are so many features along the Parkway’s 469-miles, that visitors find it necessary to visit the Parkway time and time again in order to experience all that the parkland and its surrounding regions have to offer. Some folks come back just to cruise the highroad and take in the visual wonders of magnificent vistas along with its 25 tunnels, 168 bridges and 6 viaducts constructed by the Parkway’s engineers.

If not for the Parkway, the general public would rarely see the views and wonders of this high mountain country. The establishment of this national park’s scenic byway has created a world above the rest, a region of beauty set aside for the people of this great land.

A word of wise to touring visitors, there are no gas station on the Blue Ridge Parkway though local towns are accessible, and restrooms can at times be scarce though there are Welcome Centers which are usually located by themed areas.  Some campgrounds and certain sites also have restroom facilities. In other words restrooms are not evenly laid out for convenience.

Sections of the Blue Ridge Parkway are closed from November to April mostly at its highest points due to inclement weather such as fog, snow and freezing rain.  Like any other roadway there are times when some sections are closed due to road repairs offering alternative direction to access and re-enter the Parkway at another point, causing as little inconvenience as possible. Before making a trip I recommend that you call their recorded message for more information and road closings at 828-298-0398 or email them at info@blueridgeparkway.org  If you need a specific question asked you can speak to a live person at 828-271-4779.

This anniversary year, the Blue Ridge Smoky Mountain Highlander is adding to its library of driving tours, 3 new featured adventures along the Blue Ridge Parkway. Our new adventures along the Parkway begin at milepost 469, which is conveniently located at North Carolina's gateway to the Great Smoky Mountains National Park, and ending at milepost 290 in the region of Blowing Rock, North Carolina. It is our plan to complete the entire Blue Ridge Parkway as part of our scenic driving tours in the near future including Virginia’s Skyline Drive in Shenandoah National Park. A National Park to National Park experience as it was intended.

As always, it’s the intent of the Blue Ridge Highlander to take our readers on a written and photographic journey, in hopes that you too will become a believer in all the wonders, mysteries and joys that the Blue Ridge Smoky Mountains have to offer.

More about the Blue Ridge Parkway

Freedom of the Skies...Interview with an Outlaw