This scenic driving tour begins on the northern slopes of the Balsam Mountains in southern Haywood County. The scenic byway title

“Forest Heritage” definitely lives up to its namesake. The 79-mile loop tour will take you deep into the heart of the Pisgah National Forest with mountain peaks reaching more that 6,000 feet above sea level. Beginning in Waynesville take US 276 to the town of Woodrow, it’s the next town east of Waynesville. At the intersection of US 276 and State 215, head south on State 215.

Following the West Fork of the Pigeon River you begin your ascent along the southern slopes of the Balsam Mountains thru the Shining Rock Wilderness Area. State Highway 215 is a two lane pave road that will take you to the top of the mountain where the highway crosses the Blue Ridge Parkway. Before your climb you’ll pass a beautiful mountain lake, Lake Logan.

Lake Logan is on private property and is not open to the public, though you can park near the bridge where the Pigeon River feeds 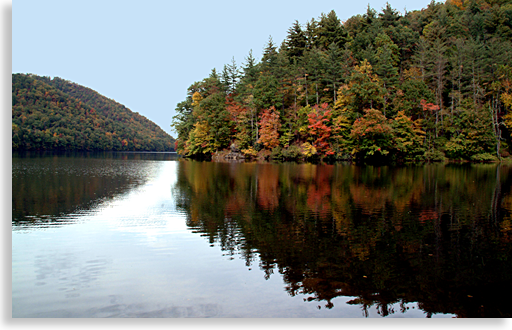 the lake. From the public highway you can freely photograph the lake with its crystal blue waters reflecting the tree-lined shores.

Two-mountain wilderness areas lie along this ascent up State 215. The first and largest of the two is Shining Rock Wilderness on the east side of the road or left when climbing the grade. Many long hiking trails lie in this area for serious hikers such as Art Loeb Trail, Fork Mountain Trail, Little East Fork Trail, Sam Knob Trail, Mountain to Sea Trail and the Cold Mountain Trail which lies deepest in the heart of Shining Rock Wilderness. The 6,030-foot Cold Mountain sets at the very center of the wilderness and whose summit is only reachable by hiking trails carrying the name of the famed novel.

The other or second wilderness is the Middle Prong Wilderness which lies to the west of the scenic drive with long strenuous trails accessing its interior. Long high mountain hikes will take you along the Green Mountain Trail, Haywood Gap Trail and the Buckeye Gap Trail.

Continuing your scenic driving tour on the Forest Heritage National Scenic Byway you will pass several large and small waterfalls that are viewable from the roadside. There is an outstanding waterfall along the right side of the road passing under the highway and immediately descending down a long drop on the opposite side of the road to your left. There’s shoulder parking along the roadside, you’re going to want to take photo advantage of this waterfall, witnessing the beauty of this unobstructed natural wonder. Keep your camera close at hand, waterfalls are abundant along this scenic tour.

This alternative route is a personal choice and adds miles to the present 79-mile loop if you choose to add the Parkway; this Highlander tour will follow the traditional charted route along the Forest Heritage National Scenic Byway.

Back at the intersection of State 215 and the Blue Ridge Parkway, cross the Parkway and begin your long descent along State 215 south. You have just left Haywood County and entered Transylvania County North Carolina. Scenic views and an abundance of hiking trails and waterfalls lie along this downward journey along the headwaters of the French Broad River.

Waterfalls are abundant in the district and just as many trails leading to them yet most of these falls are well off the scenic byway though three waterfalls are close to the tour route. These three waterfalls, listed from upper mountain to lower mountain are Courthouse Falls, Bird Rock Falls and Diamond Creek Falls at the end of US 215. Highway US 215 reaches its ends where the scenic drive reaches the intersection of US 64 at the town of Rosman in Transylvania County; take a left onto US 64 as you continue your loop driving tour.

From Rosman, Highway 64 follows the French Broad River to the mountain town of Brevard. Follow Highway 64 just past Brevard where you will come to highway US 276. Turn left onto US 276 and head back into the forest for an exciting climb up the southern face of the Balsam Mountains. This ascent along the Forest Heritage National Scenic Byway is filled with sights and information about these beautiful woodlands you won’t want to miss and is probably the most renowned section of this entire scenic driving tour.

The Cradle of Forestry is here, the Pisgah Center for Wildlife Education is a must see, Sliding Rock and its natural cascading water slide is a favorite, plus there’s Sycamore Falls, Looking Glass Falls and other special features including a historical settlement are located along this route.

This isolated region was once a part of George Washington Vanderbilt’s famed Biltmore Estate once 125,000 acres. It was George W. Vanderbilt’s personal inspiration that this great forest be restore and preserved for the public's enjoyment and posterity. George Vanderbilt originally hired Gifford Pinchot to manage his vast Biltmore forest. From this experience Mr. Pinchot became interested in formulating the national forest policy and moved on. George Vanderbilt then hired Dr. Carl Schenck who began the Biltmore Forest School around the turn of the 20th century, which set forth a foundation for national forestry rejuvenation and preservation. Both Pinchot and Schenck went on to serve as chiefs of the U.S. Forest Service.

In 1968 Congress set aside 6,500-acres of the Pisgah National Forest for the Cradle of Forestry in America on property purchased from the Biltmore Estate creating a school in honor of Dr. Carl Schenck who began the first school of forestry at Biltmore Estate. This isolated region is considered the birthplace of the National Forest Service with the Cradle of Forestry School resting below the shadow of Looking Glass Mountain’s glistening rock face which can be fully viewed without obstruction from a Blue Ridge Parkway overlook just west of Wagon Road Gap.

The Pisgah Center for Wildlife Education which is operated by the North Carolina Wildlife Resources Commission. The center focus on the wildlife and habitats of the North Carolina's Mountain region. The exhibits are designed to show the relationship between people and wildlife, and the natural resources they share. In addition to the exhibits, you 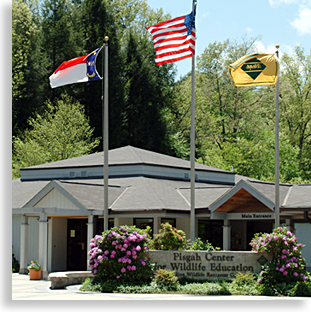 will find hiking trails a trout raceway and gift shop and is an enjoyable visit for all ages.

One feature located just outside the center and essential to what the mountains are today is a commemorative bronze monument featuring one lone figure who represents the millions of Civilian Conservation Corps' (CCC), men that brought life back to these forests. The commemorative Camp John Rock plaque reads "This monument is dedicated to the young men who served in the Civilian Conservation Corps, 1933 - 1942.  During the Great Depression, three million unemployed young men found meaningful work in the President Franklin Roosevelt's CCC.  Known as the "Tree Army," the CCC worked out of camps on Federal and State lands to improve America's forest, parks, and agricultural lands.  Our country is indebted to the CCC for their conservation of our lands and their contribution to public recreation.  Here stood Camp John Rock (F-1, F-28), the finest established on U.S. Forest Service lands in North Carolina, where Companies 402 and 428 served between 1933 and 1941." 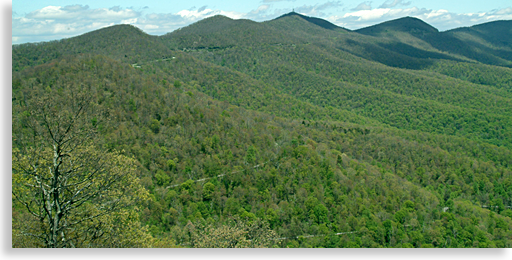 The name Shining Rock derives its name from the visible white quartzite at the mountain peak’s 5,640-foot summit. This route is laden with its own sites and wonders, as you will wind down the mountain following the Little East Fork of the Pigeon River along the eastern edge of Cold Mountain. Long trails in this region of the Shining Rock Wilderness are Old Butt Knob Trail, Shining Creek Trail, Big East Fork Trail plus you can access the Cold Mountain Trial from here also.

Highway 276 ascends along the Pigeon River as this scenic tour winds back to the little town of Woodrow just east of Waynesville ending this scenic driving tour along the Forest Heritage National Scenic Byway.

The Forest Heritage National Scenic Byway is a full day journey with many sights and experiences to take advantage of, the drive alone will take about 3 full hours so plan at least a half a day for a shorter trip.

To shorten your driving tour trip schedule in half so you can enjoy more of the features of Haywood County’s Shining Rock Wilderness Area, follow the same starting route take a left turn when you reach the intersection of highway 215 and the Blue Ridge Parkway, follow the Parkway to US 276 and turn left again. This alternative driving tour will cut your trip in half and give you a chance to stretch your legs and enjoy the wilderness lands of the Balsam Mountains northern slopes and the Cold Mountain region.