From the heights of Wayah Bald’s 5,385-foot summit and its surrounding mountain peaks in this region of Nantahala National Forest, waters flow down from mountain slopes, gathering in the highest mountain lake in North Carolina, Nantahala Lake.  From there, these gathered waters flow northward down a natural drainage path, thru the narrow Upper Nantahala Gorge and pass the powerhouse before taking a sharp right turn into what is known as the Nantahala River Gorge.

The Nantahala Gorge dividing Graham County to the northwest and Macon County and Swain County to the southeast cuts like a giant table saw thru a massive mountain range with mountains summits reaching beyond 5,000-feet on either side. Making its way along the floor of the gorge are the white-capped waters of the Nantahala River. This river gorge is a spectacle of beauty and wonder in the Nantahala National Forest. The Nantahala River winds and rushes along its nine-mile course then cascades over both a small and large waterfall on either end of the town of Wesser located in the east end of the gorge before exiting its bordering mountains and flowing into the tranquil waters of Fontana Lake.

A natural rainforest covers the steep walls of the gorge from ground floor to sky ceiling. An ancient landscape carved by erosion over millions of years has created a natural path from valley to valley, providing an accessible trail thru a mountain wilderness for travelers dating back thousands of years.  Yet it's the Nantahala River, the glistening jewel of the gorge that is the center of focus for the tens of thousands of visitors who arrive here each year from spring thru fall, testing their courage and expressing the trill of it all on the white waters of the Nantahala River.

On any give day between mid-March thru mid-November you’ll find whitewater enthusiast yelling, laughing, and screaming with joy as they paddle along the current in large rafts, slalom, kayak, funyaks, and canoes.  You can bring your own watercraft, or rent from one of the ten local outfitters on the Nantahala River, most visitors choose to take guided tours with experience river guides.

The eight-mile river trip through the Class I, II and III rapids takes about three hours, figure on a least half a day with the outfitters transportation to and from the river.  The river’s current goes from gentle to swift to down right thrilling over large rapids, a great experience especially for those who find some wilder whitewater more intimidating. The Nantahala is great for the whole family from grandkids to grandparents.

There are two put-ins (river access) provide by the U.S. Forest Service.  The first one is where the Nantahala River leaves the narrow Upper Nantahala Gorge just below the powerhouse at the Nantahala River Launch Site along U.S. 19 and NC 1310 in Beechertown.  Don’t bother looking for a town at Beechertown there isn’t one, an old settlement and orchard once existed there. A parking area, picnic, dressing rooms and restrooms occupy the old settlement, a lone chimney in the center of the parking are date back to 1939, a double set of chimneys across the river date back to 1890.  The next put-in is a short distance up the river at Ferebee Memorial Recreation Area, a parking and picnic area plus restrooms are located there, Ferebee was a large land owner who donated a lot of river property to the Nantahala National Forest.  There are modest parking and viewing areas along the river if you want to watch the rafters coming down the river and a suspended bridge across the river leading to a trail on the opposite bank. 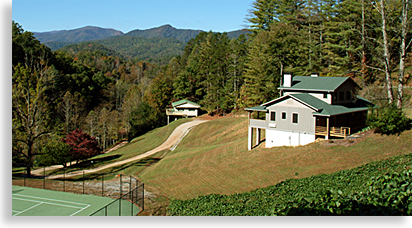 At the end of the Nantahala Rivers white water run is the rafters take-out and a larger viewing area along a wooded observation deck above a small but wide waterfall, a great place to photograph.  The town of Wesser and just past there is the Nantahala Village and resort.  Dining, lodging and gift shops are available at these to locations plus a large picnic area near the bridge in Wesser.  Located in Wesser is a small railroad depot still in operation for a scenic railroad.  Wesser is the final takeout along the Nantahala River for paddlers for one good reason; just pass the bridge in Wesser is a large waterfall.  Rafters don’t want to go any farther due to the waterfall yet your likely to see experienced kayakers running the rapids and a racing course before and after the bridge above the falls.  Sightseers can cross the bridge and hike along the railroad tracks a very short distance to view the falls, a very short distance further from the falls is another low waterfall that enters the Nantahala River from the side across the river.

From Wesser the Nantahala River winds through steep mountain terrain exiting the great mountain range and flowing into Fontana Lake joining the Little Tennessee River and other mountain rivers then exit through the tallest dam in the eastern United States Fontana Dam. Leaving the dam the waters continue to flow down the Little Tennessee River winding through the far western edge of the Blue Ridge Mountains at the southwestern base of the Great Smoky Mountains National Park before emptying into Tennessee Valley below. From there the waters of the Nantahala River crosses Tennessee, Kentucky before entering into the Ohio River flowing then into the Mississippi River finding its journeys end in the Gulf of Mexico one thousand plus miles away.

Whether it’s the thrill of whitewater rafting or just the beauty of the Nantahala River Gorge that draws visitors there’s something in the gorge for everyone’s enjoyment.  You can ride the river, ride the road or ride the rail. U.S. 19 skirts along the southern bank of the river winding along the gorge’s sheer rock walls and tree lined forest on one side with rushing water on the other.   Seeing rafters yelling and waving it’s well worth the journey while enjoying the beauty of the gorge is a thrill in itself. Across the river you can see the scenic railroad wind through the gorge passengers doing the same as you, watching the paddlers and enjoying the scenery.

There are several hiking and mountain biking trails in the area for those who are looking for exercise and some quiet space.  For the true hiking adventurer the Appalachian Trail crosses the Nantahala River at Wesser. The trail climbs along switchbacks nearly straight up the Nantahala Gorge to the top to Cheoah Bald at 5,062. The view is stupendous the hike very strenuous. Always remember to wear proper hiking footwear, make sure to carry adequate water and use only marked trails. 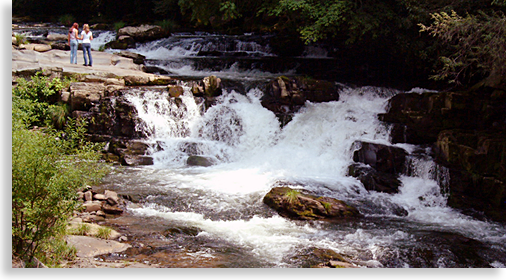 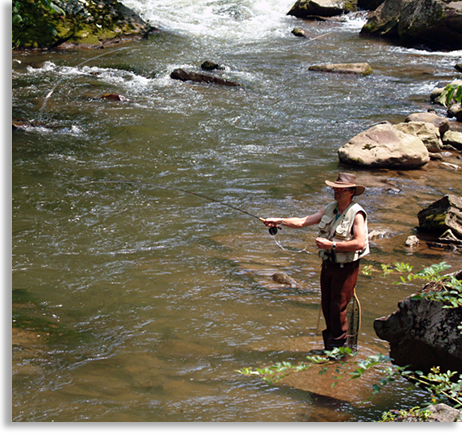 Most of the Upper Nantahala River Gorge is much to narrow and rocky for rafting dropping at a 45-degree angle.  Parts of the  Upper Nantahala are fairly level and ideal for fly fishing a great place to work your craft in waders and no screaming rafter to chase off you pry.  The river-waters of the gorge are stock with over 6,000 fish from March to August.  The fish grow quickly here an it’s the only trout waters that permit night fishing in North Carolina, check the local forestry for more information.

The Upper Nantahala River Gorge is captivating, its beauty is unparallel with a paved road winding along the banks of its crystal white waters coursing thru the steep gorge.  The Cherokee and their predecessors referred to these gorge as the “Canyon of the Noon-Day-Sun.” The sun only shines across the entire floor of the gorge during the noon-hour, the rest of the day there a long shadows along its length on either side of the gorge.  When the sky is overcast the daylight is more even balanced making for better photo opportunities.

The Nantahala River Gorge is beautiful the year round.  In the winter you can see the heights of the rocky gorge rising beyond your sight along with the occasional layer of ice clinging to jagged rock walls.

In the springtime the white flowers of dogwood bloom in unisons before the coming of pink and white ivy, flaming azaleas and white and pink rhododendron orchestrating the continual beauty of natures innocence throughout the gorge, showering these narrow river passageways in the brilliance of colors.

When summer arrives mist rises in the early morn from the rushing river waters throughout this natural rainforest producing a sense of mystery contained within a thickness of emerald green completely lost to the world above and beyond.

During the fall season these two river gorges are bathed in color set against the translucent rays of light that shine throughout the gorge at every turn.  Delicate leaves float upon breezes carpeting the floor of the ancient gorge.

Yet it’s the crystal clear white capped waters of the Nantahala River that shares its glory with its visitors each year whether your just sight-seeing or taking the thrill of a lifetime riding the waters current, slamming the curls or wading the waters with line and tackle.  It’s all here just waiting for your arrival whispering your name beckoning you to come and share the joy that awaits you in the land of the “noon-day sun’” the Nantahala River Gorge in Western North Carolina.

Plan your next whitewater rafting trip or fly-fishing adventure in the Nantahala River Gorge in Western North Carolina.

click banners and icons to check out our sponsor's web pages...

White Water Rafting on the Nantahala

Rafting on the Nantahala River

Experience this unforgettable whitewater adventure through the gorge. The Nantahala is exciting, and a great time, but not as wild as the Ocoee.  This is a river that you can bring children on as young as seven years old.

Experience the excitement of Patton's Run, the fun and splash of Tumble Dry, the rush and roar of riding Class III Nantahala Falls. For a bigger thrill, try taking one of our Duckies down the river!

Whichever course you choose you are sure to enjoy the newest outdoor adventure to hit the US.

All our courses offer a soaring and gliding experience naturally fueled by a gradual drop in elevation. All trips offer fully guided tours with 2 or more Rangers on at least 10 zips, 4 bridges beginning with a training course at each location.