When I was a boy, there was no such thing as television. You were really blessed if you had one of those new fang-dangled crystal receiver sets, they was really scarce. We didn't have electricity, we had to use a battery, so we could only listen to the crystal set on Saturday night for a half hour...the "Grand Ole Opry." 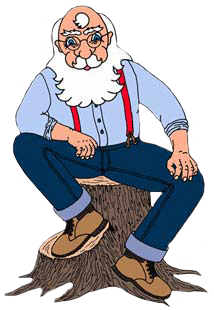 Our family looked to each other for most of our entertainment and a lot of it was found in the art of storytelling. We got news from family, neighbors, and letters from distant kin, and that is how some of the tales began. As these tales were shared, other folks would add their own special touch, that's what turned them into folklore.

I loved to listen to these tales being spun, I could actually see them come to life. What could have just been myth became legend. Tales of Mountain Folk, Native Americans and Mountain Critters are favorites of mine.

Much of the past is all but gone, though memories do linger on. That is why I would like to share these folk tales and lore, that they may be enjoyed by everyone, cherished by the "Mountain Folk," and preserved for generations to come.

Read my tales let me know how you like them...
The Tears of Fairies
Cherokee Legends of the Black Bear