Rabun County is one of North Georgia's most popular vacation destinations; a two-week holiday might not be enough.  This unique mountain region is tucked away in the northeastern corner of North Georgia's Blue Ridge Mountains along the Eastern Continental Divide. From Rabun Bald's 4,696-foot summit in the county's furthest northern corner, to the nearly 1,000-foot deep Tallulah Gorge at the county's southern end, Rabun County is diverse in ways that offer a mountain experience that's quite unique. 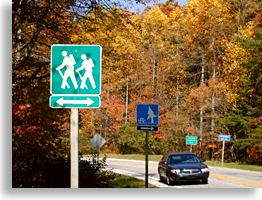 Along US 76 at the far western county line where Rabun & Towns Counties meet, is Dick's Gap, a popular junction where the world-renowned Appalachian Trail crosses the highway running parallel to the gap. Dick's Gap is a convenient AT trail access, that has access to parking, picnic tables, and an informational kiosk.   Beginning at Springer Mountain in North Georgia, the trail traverses the backbone of the Blue Ridge-Appalachian Mountains in the south, trekking northward approximately 2,167-miles and finishing at Mount Katahdin in Maine.

Visiting Dick's Gap offers one a chance to personally experience this infamous trail for a short or possibly a day long hike, then enjoy a reverse view of the trail and mountain vistas on their return trip.

Traveling a few miles eastward from the gap and descending into Rabun County you'll come to a very special overlook along the north side of US 76.  From this overlook you'll behold a stupendous view of high mountain ranges and deep valleys to the north, the community of Tate City (formally a mining, turned logging community) lies hidden within it dense forest and hills.  This overlook offers an outstanding view of the Tallulah Basin.  Within the heart of the basin are small farmlands, rushing creeks and some waterfalls.  During the logging boom of the late 1800's and early 1900's, this region was virtually stripped of its forest leaving a wasteland behind.  Thanks to the National Forest's reforestation program during the 1930's, the majestic view has been restored to its natural glory. 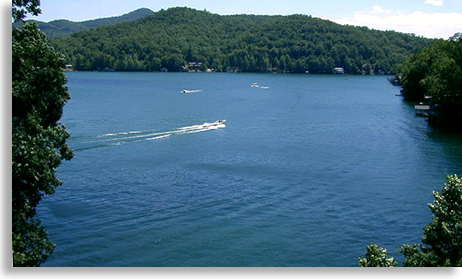 These lakes are popular, and allow water recreation such as boating, fishing and swimming.  Vacation homes as well as full time residents line much of the shoreline. 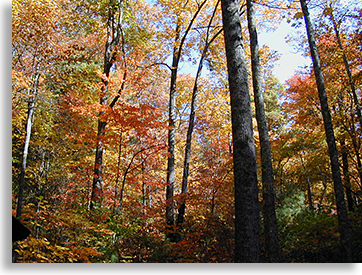 Located in the central region of Rabun County and bordering the northern end of Clayton is Black Rock Mountain State Park, Georgia's highest state park.  Black Rock Mountain derives its name from its sheer dark granite cliffs.  The summit of the park reaches a height of 3,640-feet and stretches over 3 miles along its crest.  The Park contains within its boundaries 1,743-acres of public land.  Within the state park are four hiking trails, streams and small waterfalls.  There's also a 17-acre lake for anglers and a trail that circles the lake's shoreline.  The park facilities offer 10 cottages, 44 tent, trailer and RV campsites with, electricity and cable TV hookups.  12 walk-in campsites, 4 backcountry campsites, and a pioneer group campground, are also available for those rugged outdoor types.  Black Rock Mountain State Park's summit Visitor Center and Gift Shop provides park information and unique gifts.  There are several roadside overlooks offering spectacular 80-mile views on clear days.  The nearby town of Clayton at the southern base of Black Rock Mountain is a great location for convenient shopping and additional lodging.

In the northeast corner of Rabun County is a section of the Elliott Rock Wilderness, a restricted wilderness area with numerous trails, waterfalls and the white water rapids of the Chattooga National Wild and Scenic River.  This is considered a more remote area.  When visiting this wilderness it's best to prepare accordingly.  For those that are experienced hikers and backpackers, the Bartram Trail weaves its way through this rugged wilderness landscape and into the neighboring state of North Carolina. 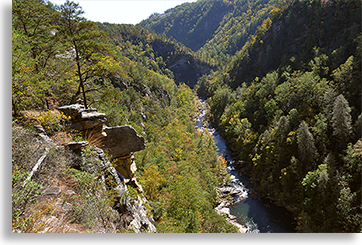 One of Rabun County's finest natural attractions lies at the very bottom of the county (literally), along the southern Rabun County edge and the state line of South Carolina's border.  Here visitors will be astounded by the Tallulah Gorge State Park and its natural wonders.  The length of the state park's gorge is nearly 2-miles long. Within this nearly 1,000-foot deep gorge or chasm, flows the cascading waters of the Tallulah River; its turbulent waters are still slowly carving the gorge's depths ever deeper.

Visitors are welcome to hike along the upper rim trail to spectacular overlooks.  Permits are required (only 100 permits are issued per day) for hiking down to the floor of the gorge.   At the bottom of the gorge, a suspension bridge drapes 80-feet above the rushing waters and numerous waterfalls along the river's course, several of the rapids are rated as class 4 & 5.

At the entrance of Tallulah Gorge State Park is the Jane Hurt Yarn Interpretive Center, welcoming visitors daily.  Exhibits within the center highlight the wealth of history of the nearby Victorian resort town of Tallulah Falls, and its days of glory around the turn of the 20th century.  Several of its historic structures and the railroad depot still stand in the town of Tallulah Falls, located on the western side of US 441 along the gorge's rim.  Included also in the Interpretive Center are early local histories of folks living in Rabun County area.  Inside the Jane Hurt Yarn Interpretive Center, visitors will also find information for the geological history and fragile ecosystem of the spectacular Tallulah Gorge and Falls.

The gem of all Rabun County Georgia is Foxfire Appalachian Museum & Heritage Center.   While visiting this historic outdoor museum, you will find rustic buildings; tools, trade goods, crafts, and a first hand look at the lifestyle of the all-but-vanished pioneer culture of the Southern Appalachian Mountains.  A group of high school students of Rabun County began interviewing their families, friends, and neighbors in 1966 for their English class project at the Rabun Gap-Nachoochee School.   A magazine based on the student research was produced that they titled "Foxfire."  From these magazines, a series of Foxfire Books were published that became a national phenomenon earning their way onto the New York Times' Best Seller List.  Often, the folks being interviewed would give the students an old tool, or a finished handcrafted item that they were discussing or documenting for the project.  Very quickly, the Foxfire project gained an extensive artifact collection.  Income from the newly established Foxfire publishing resources enabled further growth for the student's heritage project.  In 1974, the student's decided to take their publishing funds to purchase land along the upper slope of Black Rock Mountain.  At this newly acquired site, Foxfire began creating a physical presence of their constructed efforts.  From the beginning, the students intended the property to be a place of interaction between themselves, their work, and their community.

The onset of Foxfire's new acquisition opened up considerable possibilities for the students.  They could now collect and preserve larger pieces of Southern Appalachian culture to share with all those interested – such as historical log cabins and other building from regional homesteads.  The majority of the 20+buildings presently at the Foxfire Museum and Heritage Center are authentic structures, dismantled and reconstructed as they were originally built.  These buildings were relocated to the museum grounds with adult craft-persons' supervision and the students' own hands.  The full-scale chapel at the outdoor museum is a reconstructed replica, due to the fact that mountain folks weren't willing to give up a family treasure of that type.

The Foxfire Magazine is still in production as well as anniversary additions of the Foxfire Books.  Living History Days, Children & Family Heritage Days, Folk on the Mountain, as well as other events and special tours are held on the museum grounds throughout the year.    Foxfire also co-host the Foxfire Mountaineer Festival each October in the town of Clayton, Georgia. 2016 marks the 50th Anniversary of Foxfire's historic longevity, with many special celebrations in the works.  The Foxfire Museum and Heritage Center is open to the general public for personal viewing and private tours throughout the year.  A trip to Foxfire is a great family outing.

The Towns of Rabun County

The majority of the mountain towns and communities of Rabun County mostly align themselves along US 441.  US 441 is four-lane corridor known as the "Gateway to the Great Smoky Mountains."

The town of Clayton is the county seat and largest community in Rabun County.  This historic, classically beautiful mountain town found its stimulated growth as a railroad town at the turn of the 20th century.   Just parallel to the four-lane thoroughfare of US 441 is Clayton's Main Street.  Quaint shops, galleries, and dining along Main Street and its neighboring avenues, compliment this historic district.  US 76 dissects Main Street at its natural center.  Visitors will find several Victorian era homes and other structures located along side streets in the historic downtown district.  The town of Clayton has done a wonderful job of preserving its architectural heritage, balancing its older structures splendidly with more recent downtown development.

Mountain City is located north of Clayton along US 441, just outside the access road to Black Rock State Park and the Foxfire Museum and Heritage Center.  Within this small community, town visitors can find antiques, local mountain crafts, shopping, and dining.

Dillard is located at the northern end of Rabun County, along US 441, and just south of the Georgia-North Carolina state line.  A Revolutionary War Veteran originally settled this area of Rabun County in 1794.  Dillard is a modest community in a picturesque setting of shops, dining and lodging.

Rabun Gap, along US 441 neighbors the town of Dillard to the south.  This community is home to the historic Rabun Gap-Nachoochee School, a private school set before a beautiful backdrop of open fields and high mountain ridges. 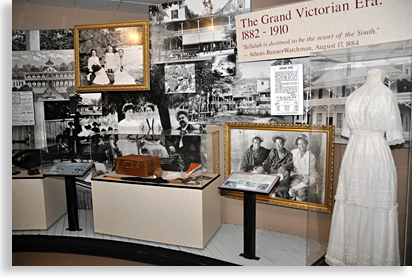 Tallulah Falls is located just off US 441 in the far southern reaches of Rabun County.  This historic turn of the 20th century railroad town is situated near the northern rim of Tallulah Gorge.  Tallulah Falls was once the ideal tourist town, due to the early popularity of Tallulah Gorge.  This Victorian era town was once both a home and vacation retreat for the well-to-do folks of Georgia and South Carolina.  With the arrival of the rail line in 1882 the town saw it finest growth period with the influx of wealth and tourists.  Fine hotels began to spring into place, with the gorge becoming popularly known as the "Niagara of the South."

Other small communities along US 441 in Rabun County are Tiger, Wiley and Lakemont.

Home of the Foxfire book series - the physical legacy built by high school students who took a real interest in their heritage while producing the Foxfire Magazine, an ongoing documentation of Southern Appalachia. Truly unique artifact collection in and around 106 acres with 20+ log cabins. Various Heritage Skills classes are offered spring to fall each year and teach traditional crafts and practices, such as weaving, herbal medicine, and broom making.

Visitors to the Foxfire Museum in Mountain City, GA, can imaginatively re-create the works and days of southern Appalachia in the 1800s.