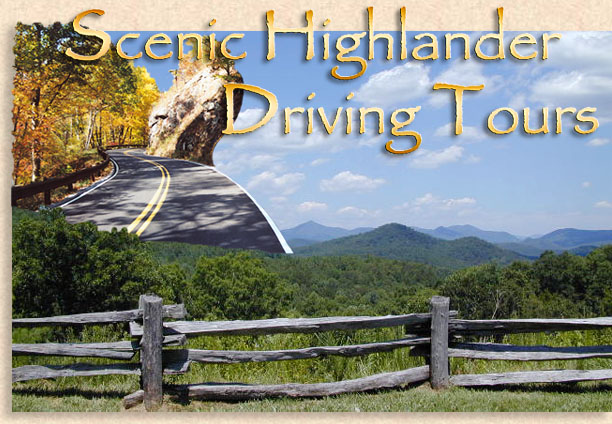 Untold Riches • Roadways thru the Highlands

Check out our Blue Ridge and Smoky Mountain Scenic Drives

Like a great key that unlocked the mysteries and wonders of a fantastic treasure, so rich in fable and resource, so vast in its expanse, that for centuries it denied all but modest extractions from the mighty grip of its impenetrable stronghold. Held within its firm grasp it bore upon its mountainous shoulders and concealed within the depths of its valleys and gorges an incomprehensible beauty, locked away like a time capsule awaiting the arrival of a new age.  An age when exploration and discovery would usher in scientific and engineering achievements, a time when leisure travel to exotic location would open gateways into the natural wonders of nature’s very own creation.

This visible gateway, unlocked by the “great key,” has swung fully open with the coming of superhighways and paved back roads.  Bands of asphalt and concrete ribbons scale the high-country and forested slopes, reaching the heights of mountain summits, penetrating the floors of deep valleys and river gorges, reaching well into no-man’s land, welcoming with open arms all those drawn into the heart of it majestic embrace.

The magnificent mountains of the Blue Ridge, Great Smokies and the Appalachian chain of the eastern continental United States have stood gracing the horizons over an immeasurable amount of time.  Human eyes have only gazed upon these natural wonders for only a moment in the scale of earth’s natural history. A mountainous landscape born out of torment and tribulation as the earth’s surface struggled to form its face beneath the heavens, achieving a state of existence unique amongst its peers. There are many beautiful landscapes around the world but none older or more comprised than the Blue Ridge Mountains.  An isolated self-contained world with a unique biosphere filled with a wildlife and flora diversity that thrives upon a surface of natural resources and precious minerals.

The first humans arrived in this mountainous region between 10,000 to 12,000 years ago, following migrating animal herds deep into the formidable terrain. These animal trails in time became paths into the mountain wilderness; here Native American villages were established often living is states of seclusion.  These villages eventually became trade centers offering a variety of riches unique to the high-country.  One such infamous trail crossing is Track Rock Gap in North Georgia.  This particular trail is most interesting due to the many petroglyphs located at the crest of the gap. It is estimated that the stone carvings are at least 10,000 years old; their mysterious meanings have eluding archeologist sense of understanding.  The Cherokee People claim the markings were their before their arrival, some Cherokee though, believe they have a clear understanding of these talking stones, echoes of a past lost in time.  One thing is for sure; this particular trail along with many others was without a doubt very significant to existence of early man and a subject that will be explored by the Blue Ridge Highlander in its featured scenic tours.

Prehistoric trails crisscrossed these remote mountains, caring trade goods, hunting parties, tribal war parties, needful communication and general social fare form village to village.  These trails became well worn yet undeveloped for centuries. Without the horse or the wheel there was no need for primitive road expansion. When the first European explorers arrived at the foot of these mountains in the 1550’s these trails were the only access into the mountain interior.  With an exploration party of over 600 men, horses and supplies it was tough going for Ferdinand DeSoto and his company in their quest for gold and discovery. These trails probably worked fine for smaller scouting parties but the larger company of Desoto’s men likely made some minor accommodations to suit their travel needs.

The Native Americans of the Blue Ridge country were not nomadic tribes; the Cherokee and their predecessors lived in established towns dwelling in solid structures not Tee Pee’s.  With the coming of European settlers the Appalachians Mountains were considered an impassable barrier, lacking in roads and threatening with hostile resistance halted any large part expansion by white settlers.  The high mountains walls of the Blue Ridge acted as a stronghold keeping local Native American safe and secure for a while.

When European hunting parting seeking furs invader these mountain lands the inhabitant’s resisted when it came to poaching. Trade goods are a central foundation to all societies and the local natives preferred to take their own fur goods to market.  Outside individuals were welcomed into the tribal communities were they married and became a part of the clan but large parties of newcomers weren’t necessarily embraced. The lack of available land along the eastern Continental United States was becoming more scarce causing a need for treaties in order to open some lands of the Native Americans for new settlements.  These treaties pushed the Native Americans farther west and deeper into the mountains.

New frontier lands created a need for wider roads to accommodate the settler’s transportation of goods into and out of the high-country. Treaties offered a thin line of trust between the two parties.  After an age of much warfare, broken treaties, wrongful treaties and the discovery of gold in the Blue Ridge Mountains the majority of the Cherokee people were eventually forced out along what became known as the Trail of Tears during the mid 1830’s.

The Cherokee People at the time of the gold discovery lived in three separate groups or town districts known as the Upper, the Lower and the Middle Cherokee.  The Lower and Upper Cherokee resided in the lowlands of northern Georgia and the Tennessee Valley; the Middle Cherokee lived in within the heart of the southern Blue Ridge Mountains.   The problems the new white invaders or rather the military had with removing the Middle Cherokee people from the mountainous terrain was the lack of roads.  Thousands of Cherokee lived in very remote towns where soldiers were sent in to round them up for a mass exodus. In some cases roads had to be constructed for such removal.

One such road still exists in its near original state in far Western North Carolina’s Graham County.  The steep mountain terrain created difficulty for mass expulsion, transporting the Cherokee from a temporary fort stockade in what is today’s Robbinsville in Graham County to another fort in present day town of Andrews, Cherokee County North Carolina was quite an undertaking.  The Cherokee people were held in stockades under terrible conditions while they awaited removal.  To move the mass of original inhabitants would require a crossing of the Snowbird Mountains, a route was surveyed by the military over Joanna Bald.  A steep winding road was cut along the mountains slopes and had to be wide enough to accommodate heavy wagon loads of people and supply goods.  This would route crosses Tatham Gap just above the town of Andrews in the Valley River Mountain region of eastern Cherokee County. From there the Cherokee would be force-marched to the Oklahoma country, thousands died along this route from the land Blue Ridge to the territory west of the Mississippi.  The Tatham Gap road still exists today and is easily accessed from either Robbinsville or Andrews; the roads surface is dirt and gravel like most mountain forestry roads. When you take in consideration that the road was constructed nearly 170 years ago, its history and its unsavory purpose, you’ll find your experiencing something quite unique as you traverse this remote wilderness-road, a wilderness whose original natural purpose was to keep most people out.  It a great journey if your just looking to loose yourself for a while in the wilds of the Snowbird Mountains back country.

With the removal of the Cherokee more white settlers moved into the mountains and took over the Cherokee’s homes a farmlands many of the new arrivals especially opportunist came for the purpose of exploiting the natural resources.  Mining and lumber company operation were set up, roads for transportation of these goods were developed prior to the future arrival of the railroads.  Today many of these primitive roads or parts of them have become scenic highways while others have remained natural forestry access roads. Today super highways have also been developed in order to accommodate more traffic with new routes being cut throughout the mountains to reduce travel time.  Highways are being improved and even more proposed; the encroachments of new roads are beginning to do more damage than good to the natural environment and watersheds. Yet it’s the majority of these necessary by-ways that have opened up this wilderness barrier to the world bringing more and more visitors each year to enjoy the beauty and wonders of these mountains offering experiences that can’t be found anywhere else.  These mountain roads have opened passageways for more commerce and a well-needed opportunity of escape to many from crowded cities and urban lifestyles.

What you will find along these highways, scenic by-ways and parkways are well-paved arteries of transportation into a majestic beauty you’ll find nowhere else.  You can scale mountains from the comfort of your vehicle, cross wide-open valleys or wind your way along the floor of a whitewater gorge.  The old unpaved forestry roads can take you into the recesses and tranquility of mountain coves and waterways where hiking trails will lead you to hidden waterfalls or secret fishing holes. You can cruise along the shores of pristine mountain lakes or white-water rivers while making your way to mountain towns or various folk festivals and become a part of the life and culture of the 19th Century mountain people. You can visit the Qualla (Native American) Boundary of the Civilized People the Cherokee and enjoy the customs and festivals of those most ancient “original mountain property owners.”

It is a privilege for the Blue Ridge Highlander to compose here at your fingertips several scenic driving tours for your considerations when visiting the Blue Ridge Mountains.  Several of these recommended driving tours are listed on the National Register of Scenic Byways while many others are preferred scenic tours the Blue Ridge Highlander has compiled due to their historical significance and outstanding scenery. The Highlander will continue to add even more virtual driving tours to our on-line magazine under the heading Scenic Highlander Tours for your virtual visual delights. From the mountains of North Georgia, Eastern Tennessee and South Carolina, across the length and breadth of Western North Carolina and into the mountains of Virginia and the doorstep of the Shenandoah Valley, the Blue Ridge Highlander welcomes its readers to join us for these unique American road trips throughout the Blue Ridge Mountains.  Below is a list of many scenic drives for you to consider when visiting our mountains, along with some helpful driving tips.  We know you’ll enjoy each and every one of them and please… Drive Safely.

Although very enjoyable, the mountains can be a driving challenge to a flatlander (no offense), to help you with your new venture, take a look at our driving tips.