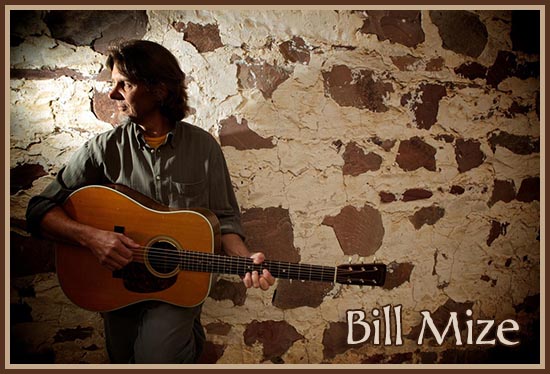 Bring your family and friends for a Holiday Concert at Arrowmont. Guitarist Bill Mize returns for the 28th year with Beth Bramhall and special guest Tony Laiolo. Cider and cookies will be served. Tickets are $15.00 and will be available at the door. We invite you to join us in celebration!

Raised in East Tennessee and internationally recognized, Bill Mize is a Winfield National Fingerstyle Guitar Champion. His music appears on the Grammy-winning CD "Stellaluna" and Emmy-winning productions such as PBS "National Parks" series and the upcoming 2019 documentary, "Country Music," by Ken Burns.

"An amazing touch, killer tone and a sense of taste that can't be beat."  Vintage Guitar Magazine

Beth Bramhall is an instrumentalist and composer whose music has been heard at the Focus Festival of New Music, in an Emmy Award Winning documentary, and a Nammy Awards Record of the Year (Stick Games, by Jim Boyd). Beth can sweeten up any room with the sounds of her subtle, melodic accordion playing.

Tony Laiolo is a fixture on the Nashville music scene. The northern California native performs all over Music City and regularly puts together memorable writers rounds featuring top talent. Tony was a Kerrville (TX) New Folk finalist in 2005 and a winner at the River Bluff (TN) Festival in 2004. His songs have been recorded by Vern Gosdin, Doyle Lawson & Quicksilver, the Oak Ridge Boys and many others.

"In any crowd, Laiolo's first-person stories and tender-yet-masculine tone stand out. His songwriting turns on clever bon mots, but his best work reveals how even the most charming among us must deal with love, loneliness and trying to recognize the difference between the light and the dark."  Michael McCall, The Nashville Scenes