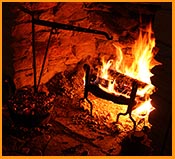 Select from a large selection of Gallery Quality Giclee Prints.

Take a break from the big city and bring your employees to the mountains.

The most western part of the state, called the mountain region because of the Appalachian Mountains that run through the area, is characterized by vast hardwood forests composed of a variety of oaks, maples, beech, poplar and many others. The tallest peaks that reach over 5,000 feet are forested with red spruce and Fraser Fir. Hemlock forests are found along streams at lower elevations and in some moist ravines at higher elevations. On the very dry slopes of this region, short leaf pine and Virginia pine may be dominant. Prior to European settlement, North Carolina was mostly forested, and Amerindian tribes were dispersed throughout this forested landscape. Accounts by early European explorers traveling through North Carolina suggest that the natives used fire to modify the forest’s condition and that they relied upon subsistence agriculture for significant portions of their diet. However, disturbance from such Amerindian activities created localized or mostly temporary impacts. The primary forests of North Carolina were extensive and varied.

Long-leaf pine forests dominated most upland soils in the southeastern part of the state, while flood plains and riverine swamps supported hardwood species. Mixed pine-hardwood forests covered most of northeast North Carolina. Hardwood forests dominated by oak, hickory and pine covered most of the piedmont landscape. Oak and chestnut dominated mountain slopes up to about 4,500 feet elevation with spruce and Fraser fir covering the highest elevations. Rich coves supported hemlock and yellow poplar. Dogwood, cedar, magnolia and many other species added to the diversity.

Earliest settlements along North Carolina’s coast initiated clearing for agriculture and development of a plantation culture and economy. Later, poor overland transportation routes funneled migration up rivers like the Cape Fear, and from the valleys settlers moved out across the inter stream divides. Eventually yeoman farmers rather than plantation owners dominated North Carolina’s agriculture-based economy, and forests were subjected to a variety of assaults.

In the 1700s the naval stores industry began to affect long-leaf forests so that by mid-century North Carolina was the leading producer of tar and turpentine. North Carolina’s market dominance continued for more than a century until depletion of long-leaf stands caused production to shift south by 1890. Further west, as settlers moved into the North Carolina piedmont beginning in the mid 1700s, lumbering and clearance for agriculture and pasturage increased rapidly. By the close of the Civil War in 1865, the state was perhaps only one-third forested, and most of the primary forest remaining was in the mountainous western portion of the state. Most of this mountain timber was cut in later decades of the 19th century and early decades of the 20th.

Amid growing national concern over the condition of forest lands in the United States, scientific forest management was first introduced on the Biltmore Estate and Pisgah Forest in 1892. George Vanderbilt’s acceptance of scientific management led him to hire Gifford Pinchot and then Carl Schenck to manage his forest lands. Schenck’s perceived need for trained foresters to carry out scientific management led to his creation of the Biltmore Forest School and a tradition that has had continuing impact on forests of North Carolina and the nation.

Regeneration of forests, through natural succession on abandoned agricultural land, with loblolly, short-leaf and Virginia pines and various oaks, resulted in a slow recovery of the state's eastern forest cover. Acquisition of cut over lands in the mountains led to formation of national forests, which have provided the basis for the high percentage of land remaining in forest in that section of North Carolina.

By the mid-20th century, North Carolina had more than 20 million acres of forest. That acreage has declined to about 19.3 million acres today, mostly due to residential and commercial development. Even with that decline, 60 percent of North Carolina remains forested with some of the most diverse forest types and the widest range of species occurring in North America.

The Nantahala National Forest was established in 1920 under authority of the 1911 Weeks Act. This act provided authority to acquire lands for national forests to protect watersheds, to provide timber, and to regulate the flow of navigable streams The forest took its name from the Cherokee word nondayeli, meaning "noonday sun." The Cherokee word is appropriate because of the number of steep gorges in the forest where the sun only reaches to the valley floor at midday.

Nantahala National Forest is the largest of the four national forests in the state of North Carolina with more than 530,000 acres which span from Murphy to Waynesville and Cashiers to Fontana Village. It runs across the crest of mountains. Nantahala National Forest has hundreds of waterfalls, as well as river valleys and lakes in the lower lands. It ranges in elevation from a low of 1,200 feet along the Hiwassee River in Cherokee County to a high of 5,800 feet at Lone Bald in Jackson County.

Nantahala National Forest is divided into three Districts, the Nantahala, the Tusquitee and the Cheoah Ranger Districts. Visitors enjoy a wide variety of recreational activities, from off-highway vehicle riding to camping. The Nantahala is famous for whitewater rafting, mountain biking, and hiking on over 600 miles of trail. Three long-distance trails—the Appalachian, Bartram, and Mountain-to-Sea Trails—cross the forest.

This 158,900-acre district lies in the far southwestern toe of North Carolina in Cherokee and Clay Counties. The Tusquitee District has three large lakes that offer a variety of recreation. Two major rivers, the Hiwassee and Valley, provide canoeing. For camping and picnicking, four areas are available.

The Cheoah Ranger District has 120,500 acres in Graham and Swain Counties. These lands surround four large mountain reservoirs and contain numerous streams. Fishing, boating, whitewater rafting, hunting, hiking, and viewing fall colors are some popular activities. From the Cherohala Skyway, you can enjoy mountain vistas. The Appalachian Trail and other trails make up a network of some 320 miles that cross the district. The district offers trails for horseback riders, mountain bikers, short-distance hikers, and backpackers. Several lakeside, stream side, and scenic developed campgrounds, and picnic areas provide a variety of outdoor experiences. For more information click here......

As a result of the Weeks Act of 1911, Congress authorized the first purchase east of the Mississippi in 1912. This purchase was 8,100 acres on Curtis Creek and Pisgah National Forest was born. Pisgah takes its name from the mountain where Moses saw the Promise Land.

Over the years, additional land was acquired, the most significant was the nearly 87,000 acres that Edith Vanderbilt sold to the National Forest Service, following the death of her husband. Today Pisgah occupies 510,113 acres divided by the city of Asheville. One hundred miles of the Blue Ridge Parkway are surrounded by Pisgah National Forest.

If you would like to know what towns are in which county,
use links below for printable pages to find out.