Poems are made by fools like me, but only God can make a tree.
Joyce Kilmer

Scraping the sky beyond the mountains they grace, stand the giants of the old growth forest. Pressing upward, they pursue their life’s goal, to live beyond the common practice of time always reaching towards the sky. Obsessively they chase the cycle of seasons, round and round until their internal structure displays an intricate circle of rings. Rings similar to the working order of a great clock, preserving and telling its story along the way.

Sunlight, air, water, earth, and the mighty tree consistency provide humanity the elements for continual life from generation to generation. For these great miracles, all that is required of us is that we recognize these elements as gifts and respect them for the blessings they provided. 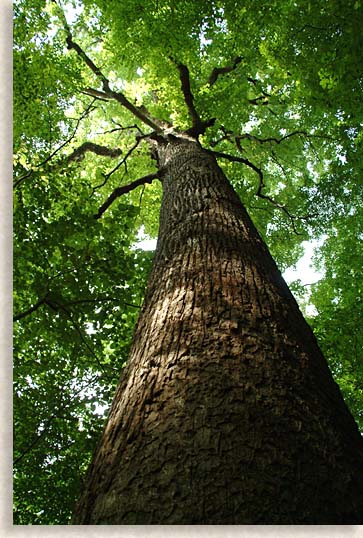 Of these five elements, the tree is unique. Their long branches provide fruit and nuts giving nourishment to both the human and animal kingdoms. Their leaves generate oxygen while providing shade from the sun, and holding moisture in the ground. Their long roots firmly grip the soil and protect its valuable nutrients from being lost, or washed away by wind and rain. Their great trunks have provided mankind with shelter, furniture, tools, containers, bridges, dams, wagons, watercraft, railway ties and so much more.  By its inner pulp, we have paper products for communication, books, boxes, packaging, wrappings, personal paper products, marketing, and artistic renderings and carvings to mention a few.  To put it simply, think about what would be missing each day without the tree and it many assets.

What mankind depends on the most often is taken for granted, and often considered inexhaustible, two very erroneous thoughts. What you take for granted you could live to regret and there is no such thing as inexhaustible resources.

Trees have stood along side us for so long that we have almost forgotten their significance except for the occasional, “Isn’t that a lovely tree,” or “Yeah, I could see it, if that tree wasn’t in the way.”

Logging has helped to build this nation as it provided jobs and products to a multi-billion dollar industry. Yet unchecked, logging can desolate the landscape causing land erosion and displacing watersheds at an alarming rate, and eliminating essential habitats for wildlife.

The “saw went wild,” in the late 19th and early 20th centuries when our country’s thirst for this natural resource nearly exhausted the line of supply. Loggers harvested trees that stood over 100 to 150 feet in height and over 20 feet in circumference to meet the supply and demand. It is estimated that nearly 80% of the old-growth virgin-forest in the Blue Ridge and Smoky Mountain regions fell to the saw by the early 20th century before the slaughter of the forest was placed under a more controlled state.

Thankfully, the United States Forest Service rushed in at the 59th minute to save what was left of the eastern virgin-forests of the southern Appalachian, Blue Ridge and Smoky Mountains.  The U.S. Forest Service purchased several tracts of virgin, old growth forests for protection and preservation with the two largest tracts of forest in the mountainous regions of the southeastern United States.

The largest such virgin forest lies within the Great Smoky Mountain National Park along the eastern Tennessee and western North Carolina border.  The second largest is the Joyce Kilmer Memorial Forest and Slick Rock Wilderness Area in the Unicoi Mountains in far western North Carolina and eastern Tennessee. It has been the U.S. Forest Service’s duty as guardians, to preserve, protect, and nourish these ancient woodlands, securing these rare "giants of the forest" for generations to come.

There is such an affection between these caretakers of the forest and the trees themselves that words often fall short in describing their heart felt relationship. Poems and literature have attempted to bind this natural kinship, yet it is the magic and mystery of the “Standing People,” (as the Cherokee call them) that continues to transcends explanation. They stand ever present for all to see in a grand state of “Awe!”

Giants of the Forest

History of Joyce Kilmer Memorial Forest  •  Nearby Points of Interest