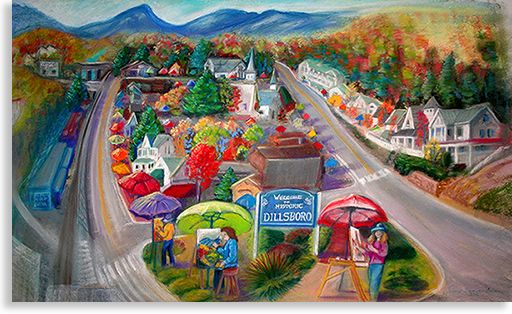 Throughout the Blue Ridge Smoky Mountains, Dillsboro stands out as one of most unique mountain towns in both style and community character. Dillsboro is a town so distinctive that the word "charming" should be included in its name. A historic railroad town only touches the surface of its legacy. Only " a stone's throw" from Sylva, Dillsboro also became well-known at the early turn of the 20th century as an economic boomtown, mainly from local natural resources especially lumber and the railroad. With the arrival of the railroad, it also grew popular as a vacation destination.

Dillsboro is a walk-about town with historic turn-of-the-century homes, shops, galleries, restaurants, eateries, inns, B&B's, and other lodgings that offer the creature comforts of home in a setting both beautiful and inspiring. The fact that Dillsboro is located where Scotts Creek merges with the Tuckasegee River, along with the construction of the new rail-line running right through the center of town, solidified this location as an ideal setting for commerce and growth. From a boomtown to a resort-art town, Dillsboro offers that small town hospitality with a special blend of style, grace, and service.

Before the town became a depot stop, it originally had a general store, drug store, boarding house, and livery stable to serve as a central location for regional lumber and mining operations. As soon as the last track was laid and the Cowee Tunnel completed, Dillsboro quickly became the most important town along the railroad line in regards to natural resources and vacation destination. The town now boasted two sawmills, several wood yards, two clay mines, two livery stables, six general stores, a shoemaker, a large hotel, and boarding houses. The construction of the Cowee Tunnel was a difficult task but essential to the success of the westward bound rail-line. Incidentally, the railroad tracks near the tunnel were used to stage a life-size train wreck for the 1993 movie The Fugitive, starring Harrison Ford and Tommy Lee Jones. Derailed cars from the train wreck are still lying alongside the rails just before they reach the tunnel. At the time of the young town's early development, the residents of Dillsboro couldn't settle on a permanent name, at first calling the town Depot, then New Webster or Webster Station, after the original county seat in the town of Webster, a short ways up the Tuckasegee River. Railroad developer A.B. Andrews suggested naming the town in honor of William Allen Dills, incorporating the town as Dillsboro in 1889. William Allen Dills, a local postmaster, businessman, and developer, was one of the founders of Dillsboro in the late 1800's. Dills built Riverwood Shops overlooking the Tuckasegee River. Today, Riverwood Shops are still a popular destination for visitors to Dillsboro.

The whistle stop nature of Dillsboro has changed very little in over 100-years, despite the introduction of tourism and the coming of the railroad in 1886. Dillsboro is mostly filled with turn-of-the-century homes, various shops, galleries, restaurants, country inns, and private residences. History lines nearly every inch of the sidewalks along the town, with 28 historic homes listed on the towns " Heritage Walk." These historic homes and structures date back from 1870 to 1938. The oldest building in town, built in 1870 prior to the founding of the town, stands across the railroad tracks on Front Street. Today this modest structure is a quaint little barbershop, adding an additional touch of charm to the town. Another significant building is the old 1930's general store and ice parlor located at the end of the block on Front Street across from the tracks. The original general store that stood at this location was constructed in the 1800's and was lost to a fire.

A favorite past-time to visitors of Dillsboro was the Smoky Mountain Scenic Railroad, operating rail tours along the line in far Western North Carolina. Today the rail service from Dillsboro operates only on special occasions; however, a big rail re-opening comeback is in the works for the near future. In the meanwhile, Dillsboro has re-invented itself as an "artisan community" of craft shops, galleries, eateries, and unique lodgings. Dillsboro hosts some of the finest and most popular events and festivals in Western North Carolina. The event and festival season kicks off early in April with the Dillsboro Easter Hat Parade and the Ducks on the Tuck (Tuckasegee River), followed in June by the Dillsboro Art and Music Festival. In July there's the Dillsboro Fourth of July Celebration, followed in October by the ever-popular Colorfest Art and Taste of Appalachia, plus the renowned Western North Carolina (WNC) Pottery Festival in November, an exciting crowd pleaser. Dillsboro ends its festival season with a big bang during its two-weekend Lights and Luminaries in mid-December, featuring a town lit to the hilt with lights and holiday decorations, offering shopping, dining, visits with Santa, and topping it all off with a fireworks display.

Today, the growing awareness of Dillsboro as an " artisan town" has really caught the wind. This Blue Ridge Highlander feature on Dillsboro has the privilege of displaying the artwork of local artist Doreyl Ammons Cain as lead painting in the Highlander's Dillsboro story. The artwork says more about Dillsboro than any photo could capture. This work of art is a beautiful expression in pastel colors depicting a creative town setting, accentuating a style within a historic and cultural surrounding.

The two most popular events held in Dillsboro are the autumn's Colorfest Art and Taste of Appalachia and the WNC Pottery Festival. Color, craftsmanship, and creativity abound during these festivals; you'll find an outdoor mall of artists, craft persons, pottery makers, jewelry makers, fine artists, and woodcarvers. Many artists display their abilities with live demonstrations of their own creative styles. During Colorfest 2013, artist Doreyl will be unveiling a large mural depicting the history of Dillsboro and mountain life in Western North Carolina. This mural will become another creative asset for Dillsboro.

Of all the creative outlets to be found in Dillsboro, it's the hospitality and community spirit that drives the town forward, preserving the past while creating a prosperous outlook for the future. The community shows within itself the personal pride and care that the towns people have for their beloved Dillsboro. Out of this community pride and hard work has evolved an outdoor center precious to the community at large--a parkland created for the sake of preserving an old farmstead and waterway along the edge of town, a landmark re-invented, re-established, and cherished by the folks of Dillsboro--the Monteith Farmstead. Monteith Farmstead was acquired by the town of Dillsboro in 2001 from the estate of Edna and Edith Monteith. The Monteith family has lived in Jackson County for generations; Edna worked at the Post Office like her father, while Edith tended the house and farm. The Monteith Farmstead along Haywood Road on the edge of Historic Dillsboro has been developed into a 16-acre multi-use park. Within the park there is a small amphitheater, a recreation area, public restrooms, walking trails, a playground, and picnic tables. Several structures of the old farmstead are still on the property, including the farmhouse, which is currently closed to the public.

The " farmstead park" lies in a small low valley on the edge of town along the banks of Scotts Creek. The creek winds around two bends bordering the park along the north and west banks of the property. Wooden decks overlook the rushing creek, displaying kiosks with information about the park, the trail, and the environmental concerns for the creek banks' natural health. The old rail-line runs through the property and crosses the creek at an old railroad trestle bridge. Both the trestle and road bridge are at the entrance to the park. This access and up-close look at the railroad trestle offers an excellent photo opportunity for the bridge and is quite a treat for kids and railroad buffs alike.

The park is open daily to the public and may be used by organizations and individuals for events; a permit for use by groups is required.

One of the finest features at the Monteith Farmstead is the Watershed Association of the Tuckasegee River (WATR) waterway that encompasses the northern and western borders of the park. A nature trail follows alongside Scotts Creek; this " mini nature trail" is called the Stream Buffer Demonstration Trail. The trail both provides access to the creek bank and offers informative signage as to the importance of buffer areas along streams. These buffer areas are critical to the stream's natural health, the fish within the creek, and the insects that the fish eat. All must thrive along the creek's banks to maintain a healthy balance. This " mini trail" is the prototype of an effort to address what has become a serious concern for all waterways, from streams to rivers and lake shores. A healthy environment is too often taken for granted by the general public. Groups and organizations like WATR are dedicated to exposing problems and developing resource solutions for healthy waterways.

Monteith Farmstead is only one site served by the WATR organization. The Watershed Association of the Tuckasegee River (WATR) is a citizen-based group dedicated to the protection and enhancement of the health and quality of the Tuckasegee River and its watershed. The organization's stated purpose is to "assist local, state, and federal regulators in their duties to protect water quality in the Tuckasegee River and its tributaries; government alone won't and can't protect all of the natural resources. Consequently, members strive to be vigilant in identifying pollution and other threats to the river. It is foolish to believe that our watersheds can just be 'left alone' in the face of the continual development."

The Blue Ridge Smoky Mountains are magnificent and awe-inspiring, yet it's the precious and pristine watershed that has shaped them into the mountain majesty they reflect. Clean water and waterways are essential to the present and future health and preservation of these mountains as well as the low land waterways that they feed outside the Blue Ridge-Smoky Mountains. With more development and construction occurring, these waterways are in constant danger, both to their natural state and habitat as well as their ability to deliver clean water. Whether you're a visitor or resident, please do your share in keeping the waterways clean and healthy and report any abuses to local authorities.

To know more about this dedicated group of waterway preservationists, you can contact them at their website, www.watrnc.org.

The Towns in Jackson County

The Small Towns and Communities of Jackson County

The Great Outdoors of Jackson County

Waterfalls and Trails in Jackson County

Points of Interest along the Blue Ridge Parkway in Jackson County