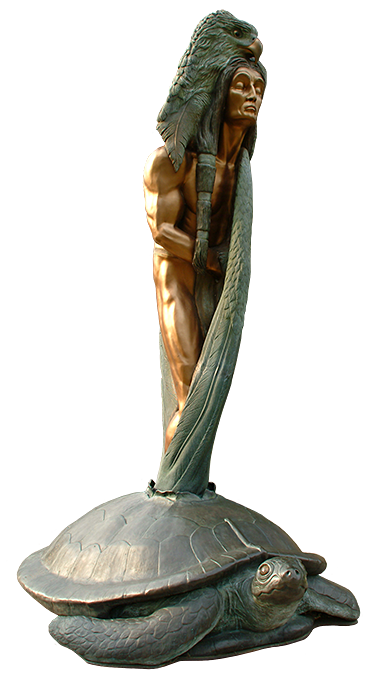 They revered their homelands unlike any other native nation.  From beyond the horizon they ruled a North American territory that spanned throughout seven states. Migrating south from the Great Lakes in the late 1400’s, the Cherokee inhabited this region for centuries, laying claim to their ancestral heritage.  Many myths, legends and traditions foretold these great mountains, rivers and valley lands as their root of origins.

After holding dominance over their wilderness kingdom for generations, their time and way of life began to crumble as the white invaders persistently pressed their outer boundaries. Oppressed and out numbered they fell under the power of a young ambitious nation who gave little to no leniency for these noble people of honor and country.

This nation of aborigines exist today as a formidable reminder, while they continue holding their ancient customs and traditions sacred. They are preserving a culture so truly American that we often overlook the obvious persona of their prestige as our nation's forefathers.

The Cherokee also known as the Principle People at the time of their original contact with the white settlers, were a considerably accomplished native people with over 200 Cherokee towns throughout the central southeast.

They often lived in harmony through trade and treaty with the new settlers and their government, even though they did fight alongside the British against the new Americans.  Due to trading goods with the Europeans in exchange for the Cherokee fur commodities, most Cherokee chose to assimilate with the new European arrivals. These material goods and influences toward a prosperous lifestyle encouraged many.  One of those was a Cherokee named Sequoyah who found it essential to create a written language for their people to preserve the future of their society.

Sequoyah believed education was the key to their long-term success with the new arrivals.  That all changed in the early 1830’s when an abundance of gold was discovered in the Blue Ridge Mountains causing President Jackson to make a decree for the removal and possession of all properties belonging to the Cherokee.  This act lead to the infamous “Trail of Tears,” where thousand of Cherokee were rounded up and forced to the Oklahoma Territory, many died along the way.

One of the many assets of Swain County is the ever-growing town of Cherokee in the Qualla Boundary of North Carolina.  In an effort to evade the United States Army in the late 1830’s led many of the Cherokee people to retreat deep into the remote region of what we know today as the Smoky Mountains.  Their resistance to leave eventually led to the securing of the Cherokee Reservation or more properly referred to as Qualla (Native American) Boundary.

Due to an unfortunate turn of events between the Cherokee and the US Army, a Cherokee named Tsali, his oldest son and his brother in-law surrendered and were executed.  Their surrender and execution freed the Cherokee people from further harassment by the Army.  Today as well as then, these men are considered to be heroes.  Their lives contributed to the present existence of the Eastern Band of the Cherokee in the Smoky and Blue Ridge Mountain region.  This natural setting for the Cherokee People provides the means for the expression and lifestyle unique to this society of Native Americans.  Their customs and contribution to history have enriched our Nation.

Native Americans hold the key to our past.  Archaeologists date their presence in the Americas back 12 thousand years.  Mound Builders of the Mississippian Culture occupied much of the southeastern and mid-western United States.  Their advanced mound cities demonstrated the supremacy of these ancient societies through their organization of individual governments, agriculture, trade, religious beliefs and customs. The Mound Builders were the predecessors of many of the Native Americans we know today.

The Cherokee People have been known throughout Early American history as the Civilized People, The preservation of the Cherokee culture along with other Native American cultures that have survived the ages are the cornerstone of our country's own past.  A past that was stripped from our commonly known history books due to European genocide, disease and the expulsion of Native Americans from their homelands.

The town of Cherokee is a wonderful place to visit for people of all ages.  There you’ll find both the gateway to North Carolina’s Great Smoky Mountains and the trail head to the renowned scenic Blue Ridge Parkway.  The community of Cherokee like all Native American Boundaries are self-governed by its tribal leaders.  The experience you’ll find in Cherokee is totally unique, the history, the customs and hospitality are that of a people who are accustomed to accepting the rights and beliefs of others.  The fact is, they are the true original Americans, and we are their welcomed guests.

The Museum of the Cherokee Indian located along the Oconaluftee River is an enlightened experience. It's state-of-the-art displays tell the story of the early Native Americans and their encounters with the first Europeans. The Cherokee People's domination of central southeastern United States began in the late 15th Century and continued through to the beginning of the 19th Century.  The museum tour concludes with the mass exodus of the Cherokee from their homelands to the Oklahoma Territory along the “Trail of Tears".

Many Cherokee date their beginning in this mountainous region to their origins of creation. They continued to trade with this region for millenniums before their re-population of the territory in the 1500’s.  Possible warfare contributed to their migration from the Great Lakes region back to the southern United States prior to the 16th Century.  The Museum of the Cherokee Indian begins with a beautiful animated film depicting their creation story and their prehistoric roots in this region of North America.   The museum’s state-of-the-art displays are both informative and a great family experience.

Some Cherokees believe their tribal ancestors have been connected with this mountainous region since the days of the great mastodon hunts.  This theory is supported by archaeological findings. A replica of a mastodon vertebra found in the local area is displayed in the museum.

There’s an abandon village site between the towns of Cherokee and Bryson City, along the banks of the Tuckasegee River and bordered by highways U.S. 19 and U.S. 74. This is the Kituwah Village.  This Village is considered to be a very sacred site dating back possibly 10,000 years.

Next door to the Museum of the Cherokee Indian, is the Cherokee Fairgrounds.  The fairgrounds have an outdoor theater with stadium seating, which is covered from the back of the stage to the back row of seats, keeping out the elements of sun 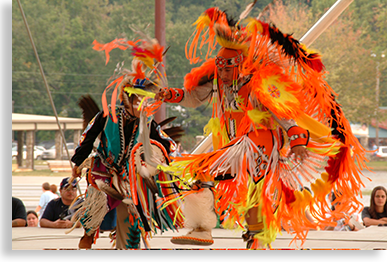 One of the more outstanding performances to attend while in Cherokee is “Unto these Hills.” Outstanding performers tell the story of the Cherokee People and the Sacred Fire. Performances include elaborate costumes, song and dance with colorful stage settings.  The outdoor theater for the live performance is hidden above the fairground behind a forest-covered hill.  Millions of people have seen this great performance. No trip to Cherokee is complete without this experience, you will be moved!

While in the town of Cherokee, you should take the time to go to the the Oconaluftee Indian Village. This is replica of a 1750’s Cherokee village.  Here daily life, arts, crafts and customs can be viewed and enjoyed, an experience set back in time when the Great Cherokee Nation ruled these mountains and southeastern valleys. You will learn a great deal by touring and listening to each story. One of my favorites was learning the role of women within the Cherokee tribe, they carried a lot of authority. If a Cherokee woman decided she wanted a divorce, all she had to do was set her husband's moccasins outside and he knew to leave.

The town of Cherokee has shops upon shops, dining throughout, lodging,and so much more.  A popular and well-established addition to the town of Cherokee is Harrah's Casino, drawing large numbers of visitors daily throughout the year.  A 21-story, 1,108-room hotel, conference center and 9 restaurants make this a serious gaming facility.

Within the Qualla Boundary you will also find a world of outdoor recreation. You can fly fish for rainbow or brown mountain trout along the rushing water of Oconaluftee River. Hiking, mountain biking, horseback riding and camping are also available throughout the region.

The Qualla Boundary offers spectacular waterfalls, scenic drives and the occasional sighting of black bears. The natural wonders and majestic beauty will make your trip a memorable one. There’s much to do and see in Cherokee North Carolina, so make sure you take enough time to enjoy it all.