The South Mountain Scenery By-Way begins on highway 226. It is a 33-mile scenic drive through the foothills of the Blue Ridge Mountains. The central section of this scenic by-way travels through the lower southwestern section of the South Mountains in the northeast corner of Rutherford County's "Golden Valley" region. Though the by-way begins or ends (depending on what direction your coming from) from the town of Marion in McDowell County, North Carolina from the north and Polkville Cleveland County, North Carolina from the south. The heart of the scenic drive travels through Rutherford County's Golden Valley in the southern regions of the South Mountains which formally gives the scenic by-way its name.

This scenic by-way passes through low rolling foothills, orchards and rich farmlands before entering into the southern end of the South Mountains region. Golden Valley became a popular destination for opportunist when gold was discovered in the region in 1828. Though the main gold strike was short lived, some local gold mining was done well into the early 20th century. So many gold prospectors poured into the area when the strike first began that it required a branch post office to be established to serve the growing population. Today the old prospectors are pretty much gone although signs of their times and hobbyist prospectors still pan for gold locally as well as other regions of the Blue Ridge Mountains and Foothills. Skilled eyes can still catch a glimpse of gold dust and nuggets in the South Mountains while most amateur prospectors just enjoy the profits of fresh air and good exercise. So important was this gold strike that the Bechtler mint was established in Rutherford County to handle the precious minerals.

This historic area saw a few skirmishes during the Revolutionary War between American Patriots and Tories loyal to the British Crown, though the population was low due to its isolation. After the gold rush days came the Civil War, after that came the liquor wars between illegal distillers and revenuers. Moon shiners found this remote oasis of mountains, orchards and farmlands a great place to distill their illicit wares. One in particular was a drink called Cherry Bounce. Here at the southern end of the South Mountains seen just south of the South Mountains Scenery By-Way is a horseshoe shaped mountain range called Cherry Mountain due to the abundance of wild cherry trees along its slopes.

This mountain range was originally called Flint Kill until a colorful character and moon-shiner named Amos Owens, born in 1821, began producing the popular Cherry Bounce drink. This powerful drink made from corn whiskey, crushed wild cherries and honey was in demand as far away as the Mississippi River country. Owens was not 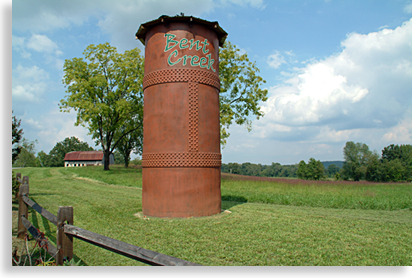 only popular with the drinking crowd he was highly sought after by local revenuers and well known in all the local county courts. His Scot-Irish grandfather fought in the Revolutionary War likely passing on hiswhiskey distilling talents to his offspring, creating a way of life for generations of rural mountain folks.

The various mountain landscape and the meadow lands in Golden Valley are picture postcard beautiful. This scenic by-way skims across the valley surface with mountains rising along either side of the roadway; little has changed the valley scenery since its early days of settlement. Today, Golden Valley is peaceful and serene, unique in its presence, an out of the way piece of God's County unlike any other. The decline and withdrawal of the gold rush prospectors and moon shine distillers have left behind in their wake a region rich in history returning the land to be an ideal mountain community filled with folks who wouldn't want to live anywhere else.

If you are looking for a secluded vacation getaway, retirement or relocation in a more laid-back slow-pace destination, Golden Valley offers the ideal setting away from the pressures of the 21st century world.

Unlike the roadways scaling the giants of the Blue Ridge Mountains, the local South Mountains roads are less intimidating for those who are

looking for beautiful mountain scenery with less altitude and fewer hairpin curves. The South Mountains are like an island composed of mountains floating in a sea of rolling foothills. These mountains are independent of the larger Blue Ridge Mountains to the north and west although they were once a part of the greater Blue Ridge Mountain Range. The South Mountains as they are called were not originally created independently from the Blue Ridge range but have been separated by eons of erosion creating its own unique mountain wilderness land. The First Broad River, which flows through Rutherford County, finds its headwaters here in the southern South Mountains before heading south into the open landscapes of North and South Carolina.

The South Mountain Scenery By-Way is a wonderful drive that takes about 45-minutes to drive each way. Allow plenty of time to check out the local history and communities along with the beautiful landscape. During your driving tour through the Golden Valley be sure to grab a bite to eat, see what the local shops have to offer or better yet, just rent a cabin and kick back for some well deserved time off, it's the best way to experience Golden Valley and the South Mountains.